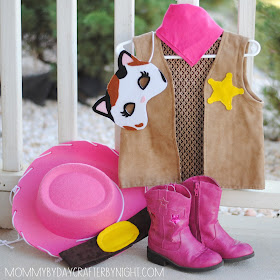 Sweet Sassafras! Have y'all heard of Sheriff Callie? Well, my 4 year old daughter LOVES her and decided that she just had to be Sheriff Callie for Halloween this year.
(If you have no idea what I am talking about, Sheriff Callie's Wild West is cute little show on Disney Jr about a kitty cat that's a sheriff.)
The only problem is that Disney hasn't come out with a costume yet.
So that meant one thing... CRAP! 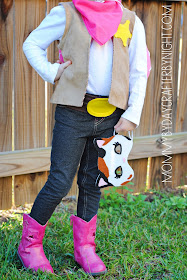 I've never made a halloween costume before... and to be honest, I kinda wanted to keep it that way. "Aint' nobody got time for dat!"

It's one thing if you are saving money to make a costume yourself, but in my experience with handmade costumes this year, I spent twice a much as I would have if I had just bought costumes and let's not even talk about the time I put into it.
(my other daughter is being Little Red Riding Hood- new post about that coming soon.) 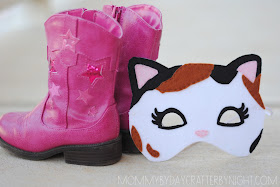 My little gal had her mind made up though... No persuading her. So I started brain storming with her help and we decided that we needed to make a mask. I think it turned out so cute... She loves it!
(It's so funny, because I never even thought about painting my daughters face to make her look like Sheriff Callie- That totally would have been so much easier! ha ha) 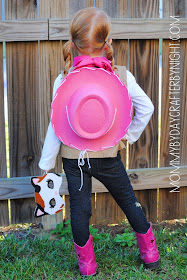 In case you were wondering- I make it a priority to not show my kids faces on blog... just for safety reasons. I know it is not as "fun" but it's a choice I made when I started my blog, so I am "sticking to my guns" and you will have to take my word for it- the mask looks darling on her! :)


Here are the details for the costume....

Mask: Made by me
I enlarged a coloring sheet found here and used it as my template for making the mask. I used stiff felt (I got mine at Hobby Lobby) for the white of the mask and then just used cheap felt for the rest of the pieces to create the face. I literally just cut out each of the elements from the coloring page and used them to trace onto felt to create the design so it really looked like Sheriff Callie. I used felt glue to glue the pieces onto the stiff base of the mask and then hand stitched them on to secure. Then I used some elastic and sewed it to each side of the mask using a zig zag stitch with a 0 stitch length and bar tacked the elastic to the mask on each side. That's it... Super easy!
Vest: Made by me
I modified the Oliver + S Explorer Vest pattern found in Little Things to Sew book. I used the smallest size of the pattern because my daughter is a tiny 4 year old and I wanted the vest to be fitted. Then I trimmed the pattern piece for the front of the vest so that it didn't come up so high around the neck and had a more "western" shape. I also left off all of the pockets and buttons on the vest. I used tan faux suede (hobby lobby) for the outside of the vest as well as the bias tape and then used some quilting cotton for the lining.
Sheriff Badge: Made by me
I used the deputy badge coloring page found here as a pattern to cut the yellow felt and then stitched it to the vest.
Belt: I used dark brown faux suede (hobby lobby) and created a belt that velcros in the back with a felt oval belt buckle sewn to the middle front.

Here are links for the elements of the costume that I bought...
Boots: Target
Hat: Amazon
(I used a long sleeved white t-shirt and some jean leggings we had already)

I hope you all have a wonderful and very safe Halloween!
xoxo, Ashley

P.S. I normally never dress up for Halloween, but just for fun... I will share what my hubby and I wore for his work party this year...
Any Buckeye fans out there??
Can I get an OH-IO?!? 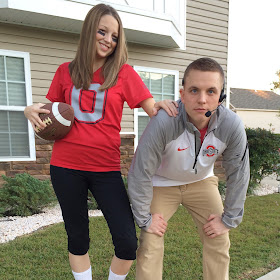 We were Coach Urban Meyer and his newest recruit! GO BUCKS! ;)
Share

Thanks for taking the time to comment. I honestly love reading every single one! If you have a question you would like answered- be sure to include your email so that I can get back to you!

Thanks so much for stopping by! Have a great day!
xoxo, Ashley